Damaška Albert František, Kouklík Ondřej, Vondráček Dominik
Acta Entomologica Musei Nationalis Pragae 61(2): 631-638, 2022
DOI: 10.37520/aemnp.2021.032
Published online: 31st December 2021
Views: 205
Abstract: The Immature Beetles Meeting is a traditional two-day get-together of the international coleopterologist community, aimed mainly at beetle larvae. Despite the still ongoing COVID-19 pandemic situation, the meeting took place on 30 September and 1 October in Prague. This year, the special pandemic conditions forced us to bring the meeting partially to the online space to make the attendance possible for all colleagues from all over the world. Therefore, the meeting went on in a hybrid – both personal and online – form. The meeting took place, as traditional, at the Faculty of Science, Charles University, and was co-organized by the Department of Entomology, National Museum in Prague, the Crop Research Institute in Prague and the Czech Entomological Society. In total, 22 participants attended the meeting in person (see Fig. 1), while another 11 participants presented their talks in the online meeting form. Many other colleagues also attended the meeting online, but unfortunately, we are not able to provide the full list of these participants. Most of the attendees who arrived personally were from the Czech Republic and other European countries; in the online session, also colleagues from Asia and South America attended the meeting as they presented their talks or posters, but we are also aware of people from North America, or Australia, who appeared in the online space as well. A total number of 14 contributions were presented, including 4 posters and 10 talks. The topics presented in the meeting covered a large spectrum of beetle families, including Cerambycidae, Coccinellidae, Hydrophilidae, Lucanidae, Lycidae, Phengodidae, Silphidae, Staphylinidae, Tenebrionidae and Trictenotomidae. Topics of general studies of beetle larvae were presented as well, including the modern methods of next-generation sequencing used in barcoding, biological sequence databases, and ecology. Moreover, the meeting continued as usual also in the evening after the session closure, in the informal “Larval Pub”, with discussions about beetles and life over a glass of the famous Czech beer. Although the meeting was largely affected by the specific conditions caused by the epidemic situation, we are happy that the pandemic couldn’t prevent the coleopterists from meeting and sharing interesting research topics again. Hopefully, next years will allow all colleagues to come to Prague in person again, to meet fully with a lot of fascinating presentations and nice (not only) beetle talks during the evening pub gatherings. For more details about the IBM, see the following online address: www.immaturebeetles.eu/ as well as our Facebook page: www.facebook.com/…tlesMeeting/.
Published PDF
Damaška Albert František, Kouklík Ondřej, Vondráček Dominik
Abstracts of the Immature Beetles Meeting 2021 September 30–October 1, Prague, Czech Republic
Acta Entomologica Musei Nationalis Pragae 61(2): 631-638 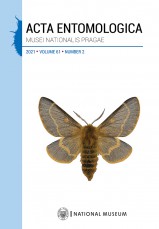